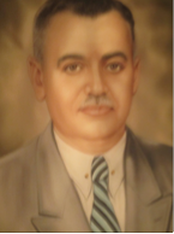 My grandfather had sensed the growing need to get the family out of Syria for some time. Anti-Semitism in their daily lives had not become much more overt, at least “not so obvious or so witnessed,” my father said. “It’s just that you sort of knew it was coming because the Arabs were beginning to ask for independence, to have the French leave Syria. And you knew once they did—well, we did not know as children, but the grown-ups knew that eventually, if they took control of the country, it would be a different country completely.”

Late in 1940, midway through the school year, my grandfather came to his two oldest sons, both teenagers, with a few words that would change the lives of my father and his brother, Saleh: “You are going to China to your Uncle Joe. You will go work with him.”
The decision was announced, not opened for discussion. Their father had arranged for the boys to work for his brother Joe’s Shanghai business exporting handmade Chinese linens to the United States.

Shortly after I moved to New York to go to college, I went home for Thanksgiving with my family. I sprawled on my parents’ bed that morning, doing the New York Times crossword puzzle as the Macy’s parade played on TV, grateful to see my overwhelming new city reduced to the dimensions of a television screen. Dad read the newspaper in the armchair beside the bed, while Mom was in her bathroom getting dressed. I almost gave up on that Thursday’s difficult puzzle when Dad, another crossword buff, asked if I needed help.
“Thanks,” I said, adding—rhetorically, of course—“but who would know the Turkish word for ‘morning’?”

“Sabah,” he said. I wrote the letters in the squares.

In some foggy corner of my brain, I remembered hearing that Dad had lived in Turkey as a child, although I could not have said at what age or in what circumstances. For whatever reason—perhaps modesty, perhaps the habit of silence that grows in people who spend many years away from those with whom they shared early experiences—my father had never talked much about growing up in Syria, or living in Turkey, or spending the war years in China before coming to America. What I knew about his life I had gleaned in disconnected bits, and I assumed I knew more or less how they fit together. Then one Thanksgiving morning, he tossed me the Turkish word for morning, and I wondered: How much more don’t I know about this man, my father?

On my next visit to my parents’ house in Maryland, I sat down with my father in his basement office, the former guest bedroom where my siblings and I had had sleepovers and parties as kids. I came with a mini-recorder and a list of questions. Dad, in his early 70s then, sat behind his big desk, surrounded by photos of his children and grandchildren. On the wall behind him hung pictures of his brothers and himself at family weddings and bar mitzvahs—smartly dressed men with high, broad foreheads and wide, confident smiles.

I remember Dad’s first, tentative words as I hit the start button: “This is the life story of me—Mike Sutton!” 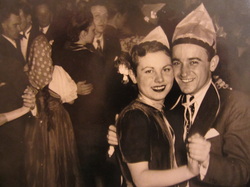 “Everyone you met was enjoying life in Shanghai to the fullest,” Dad recalled of his first months in the new city in the spring of 1941, “never dreaming that a few months later, everything would change with Japan’s entry into the war.” Shanghai bustled with commerce and revelry, seemingly impervious to the conflicts intensifying around the world.

By summer, however, signs of war were inescapable. Dad’s Uncle Joe got his first serious indication that China might soon be involved on a business trip to Japan in August, when he realized that Japanese authorities had ransacked his luggage in his hotel room to see if he was a spy. He knew that as an American citizen, he would be considered an enemy if Japan and the U.S. ended up being at war. Japan already had troops in Shanghai, although it didn’t govern the city, after invading much of eastern China in 1937. In the summer of 1941, Americans began vacating the Hongkou district where they lived because they feared U.S. involvement in the war, and Japanese troops took their place.

“[The Americans] anticipated that war was coming and wanted not to stay there and be subjected to Japanese occupation,” Dad explained. “That left a vacuum, and the Japanese came in and filled that vacuum.” Joe packed his belongings and booked passage on what turned out to be the last passenger ship to the United States until the war was over, leaving my father alone in Shanghai. The young man whose father had deliberately directed him away from his textile business in Aleppo found himself across the world from his family, working in the linen exporting business, living in a little room at the YMCA.

“Realizing that I was not capable of taking care of the whole business myself, my uncle kept on a manager,” Dad explained, the Syrian man who ran the Shanghai office when he was out of the country. Still, much of the responsibility fell on my father, who felt compelled to learn what the business required as quickly as he could, although, “Of course, I was still a young kid.”

For the next few months, he continued working in the office with the manager, communicating regularly with his father and grandfather by mail. He recalled the great trepidation he felt after the Americans pulled out from Shanghai, knowing the Japanese were allied with the Germans and that there was no way to foretell what they would do in Shanghai if the city became involved in the war. There was nothing to do but wait.